As Len and I work every day on Threads, we appreciate more and more the efforts of independent filmmakers around the world.  We learn something new every day about how many things go into creating and distributing a top-quality film.

Writing a compelling story that works on film is a crucial task, and one that I have been working on for some time.  A number of very experienced filmmakers have offered me good advice on how to tell the story and write the film’s script, but all of them have added that there is no single right way to do this and that each person finds a way that works best for him or her.  So there are probably as many ways to create a script as there are people who write them.

Here is how I have approached the daunting task of telling a story using material that we have already filmed as well as holding places for interviews and images that we still plan to capture.  I took copies of the transcripts of the film footage that we have and cut out the parts that I feel tell the story best.  I then assembled these on a large surface — a bedroom wall, as it turns out.  I can see at a glance all of the pieces of the puzzle and re-arrange them as needed to make the story both interesting to the viewer and true to the reality of Surayia, Bangladesh and the women of Arshi. 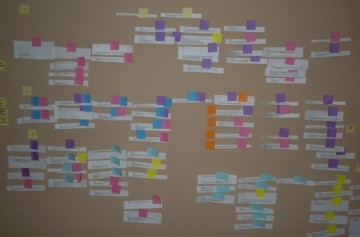 The script on the wall.

The script evolves
Kantha, Indigo and Bangladesh in Vancouver, BCThank you, SIFF
Scroll to top