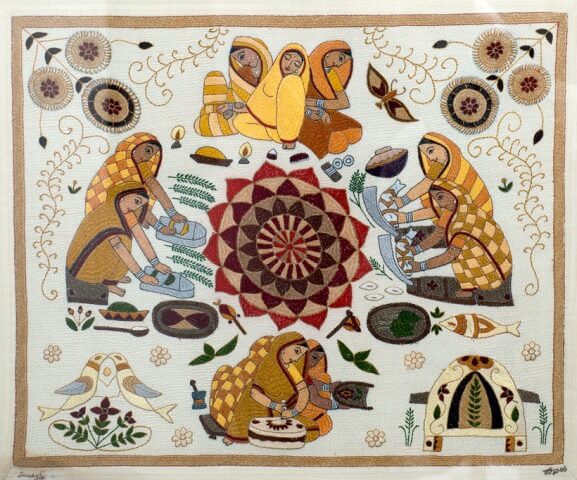 Weddings and the ceremonies surrounding them were a recurrent theme in Surayia’s work.  “Holud” and “The Bride’s Palanquin” are two of the many scenes from traditional Bengali weddings that she re-created and brought to life through embroidery.

“Holud” depicts the turmeric ceremony which takes place a few days before a Bengali wedding.  The groom’s family (but not the groom) go to the bride’s house with her wedding sari, fish, and other gifts.  The bride is painted with bright yellow turmeric paste, and the bride’s family prepares an elaborate meal for the guests.

“The Bride’s Palanquin” shows the sedan chair that a new bride rides in.

As the world looks toward the UK and the upcoming royal wedding, we are reminded that the government of Bangladesh presented Her Majesty Queen Elizabeth one of Surayia Rahman’s nakshi kantha tapestry designs during an official visit to Bangladesh in November, 1983.  The tapestry was a story in stitches based on a poem by Jasimuddin.  We are told that the royal couple were so taken by Surayia’s designs that decorated their guest house that they purchased several others.

We wish William and Kate a long and happy life together! 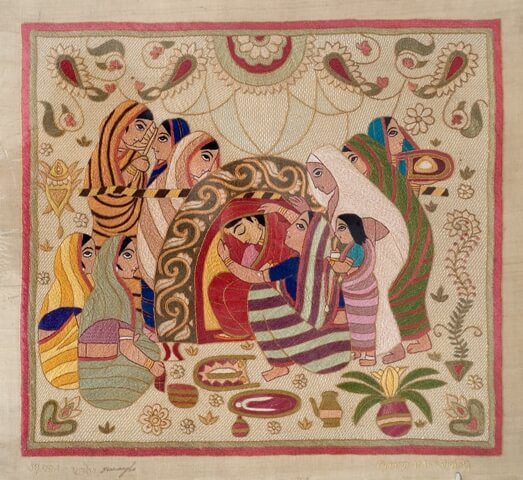