Since arriving in Dhaka two weeks ago, we have visited Surayia as often as possible and have brought several friends to meet her.   Here are just a couple of stories: 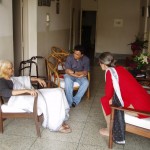 Within hours of arriving in Dhaka we met Rafi Haque, Executive Secretary of the Society for Promotion of Bangladesh Art, who helped us get around a much-changed and thus unfamiliar Dhaka for the first few days.  Rafi is an excellent, award-winning, artist, and a wonderful person.  We took him to meet Surayia, and it was a pleasure to see the two of them fall into a deep discussion of art and the role of artists in society. 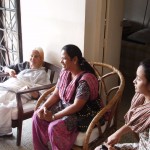 A few days later, we were with Surayia when the doorbell rang and two women came in to visit her.  They were Razia, one of the two original embroiderers who worked with Surayia, and her daughter Nazia.  Surayia and Razia had a wonderful time discussing their early years together.  We had a photograph of the first tapestry that they produced together, which neither had seen in decades.  They both identified elements of the design, partly based on old kanthas from the Stella Kramrish collection in Philadelphia and partly Surayia’s original work.  They also discussed how Razia had supervised the creation of a single-thread silk embroidered cover for a book that was presented to Queen Elizabeth during her visit to Bangladesh in 1984.  Nazia looked surprised and told us:  “I never knew until now that my mother supervised the making of a nakshi kantha tapestry given to the Queen!”  We urged her to talk with her mother in more depth about her early years and to write us with her memories.