Posted by:  Cathy and Len
One of the fascinating stories that Surayia has told us is about Sarah, from Iowa, USA.  Sarah was staying in Dhaka while her husband worked on a contract to build grain elevators in the late 1960s in what was then East Pakistan (now Bangladesh).  Sarah appreciated Surayia’s painted ceramics and silk scrolls which she discovered at the shop of the Women’s Voluntary Association in Dhaka. 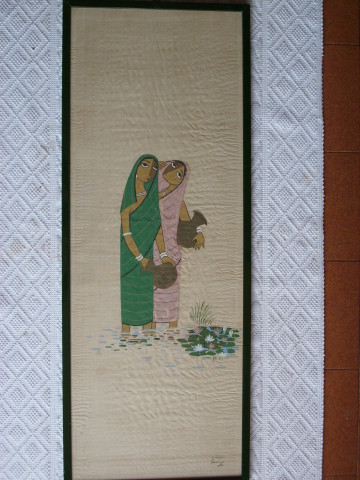 Sarah would send her driver to pick Surayia up and bring her to the hotel where she was staying, and over time they became friends.  Sarah was particularly interested in Surayia’s hand-painted silk scrolls that showed lives of village women collecting water in pots at the riverside.   She asked Surayia to make scroll paintings to be sold at the museum shop of the Des Moines Art Center.  To this day, Surayia can recite the address in Des Moines where she mailed the scroll paintings – such an important memory this was!  The money she received for the paintings came at a critical time: Surayia was struggling as the breadwinner of her young family.  As she tells us: “I built my house with that scroll money.”

Through research and luck we were able to find Sarah’s son, and to tell him about how his mother had helped an artist from a distant country.

We were pleasantly surprised recently to hear from several Iowans who had learned of Surayia from Sarah’s son and were interested in visiting her while they were on a trip to Dhaka.  We put them together, and they had an opportunity to meet and talk.  Surayia always enjoys opportunities to re-connect with people from her past and to have a chance to think back on her days of painting.   Despite her many hardships, art connected and uplifted her.

Surayia’s art is now found in many private collections and museums throughout the world.   But, forty years ago, when Sarah reached out to Surayia in friendship and recognized talent when opportunities for women artists were few … it changed Surayia’s world.  Surayia then went on to share her skills with others, creating ways for young women to help themselves and their families to a much better future.

Do you have a story of threads of connection between Iowa and Bangladesh?