How many lawyers and rhinos are there in Surayia’s work “The Raj?”  The answer is:  One … and two, depending on when the piece was designed. 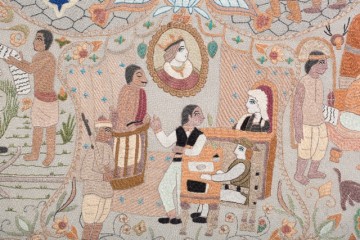 The original “Raj” with one lawyer.

In recent weeks we have had several fascinating conversations with Andreas, a friend of Surayia’s who encouraged her to design a nakshi kantha tapestry based on her experience as a witness to the last days of British rule in Calcutta.  Surayia mentioned Andreas to us some months ago, saying that we should get in touch with him.  Asked where he was and how to contact him, she said: “Oh it shouldn’t be hard to find him, he’s a German man.  Ask in Germany.  He gave me a leather book once.  Ask at the bookshops, they will know his address.”   Fortunately for us, an internet search turned up contact information for a man who seemed to be a match, and an e-mail to him asking if he might be the person Surayia mentioned brought a quick and gracious reply. 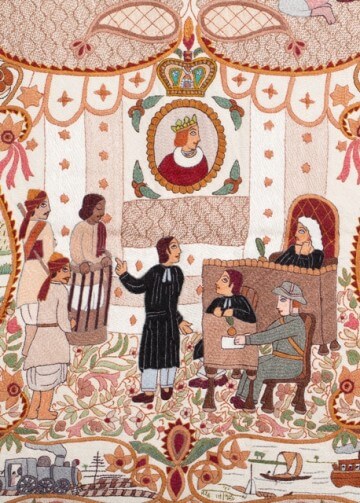 The updated “Raj” with a second lawyer.

Surayia tells us that, when she was encouraged by Andreas to design the tapestry that she called “The Raj,” it had a hunting scene with one rhinoceros, and a courtroom scene with one lawyer.  This design was produced under the auspices of the Skills Development for Underprivileged Women project.  Surayia later was let go from SDUW.  The project retained her original designs and applied to the Copyright Board for ownership.  When some of the women from the Skills Development project came to ask her to help them, Surayia formed her own organization Arshi, and needed to re-create the designs.  With the copyright proceedings looming, Surayia tells us that she was advised to make her designs with a difference.  So … the single rhino is the hunting scene became two rhinos.  And the single lawyer in the courtroom gained a colleague.  As she tells us in one of the interviews that Mishuk Munier filmed in Dhaka:  “I never saw a courtroom before but I did a perfect courtroom scene, with two lawyers.”

For thirty years and continuing today, Surayia’s designs in both versions are the center of livelihoods for many artisans of Bangladesh.    The Threads film is a story that goes well beyond ‘one’ or ‘two’…it is a story of how one person, with creativity and sharing skills, can impact the lives of communities for generations.   The artwork is not the only legacy; it is the children who are schooled, the women who are empowered to buy their own land, and those who are teaching others to stitch beauty for a future.

“Raj” with one rhino. 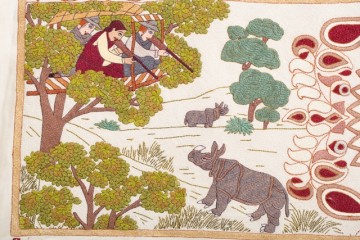 Photos by Tino Sieland.  Used with kind permission of the owner.