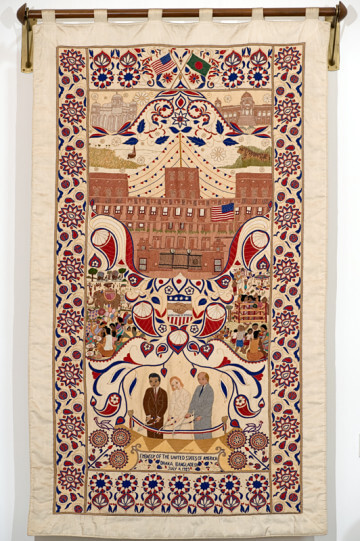 Nakshi kantha tapestry commissioned for the opening of the US Embassy in Dhaka, 1989. Surayia Rahman design. Photo: Anil Advani.

The May edition of State Magazine was posted online today, and it was a pleasure to see Surayia and the women of Arshi in two places: the table of contents (page 3) and in an article I wrote for the magazine on page 32.  Anil Advani’s iconic photo of Surayia in the midst of her “girls” says so much with a single image.

It is gratifying that both the Foreign Service Journal and State have found the film project interesting enough to publish articles.  Members of the Foreign Service community — from the U.S., Canada, and other countries as well — have always been strong supporters of Surayia and her art.  The Canadian High Commission in Dhaka gave the first small grant that got Skills Development for Unprivileged Women going; the U.S. Embassy commissioned Surayia to do work that now hangs in the Embassy; three U.S. Ambassadors that we know of have and display Surayia’s work in their homes, as do many other current and retired Foreign Service members.