Len and I had a great experience June 24 showing Surayia’s work and discussing it with members of the Greater Pacific Region, Embroiderers Guild of America (GPR – EGA) at their regional seminar in Tacoma, WA.  The level of skill that these embroiderers — who come from various parts of the western United States — have is remarkable.  Their interest in and appreciation of the work that goes into a nakshi kantha tapestry made for interesting and lively discussions.  We arrived at 7AM to set up and the day flew by as we discussed Surayia, Arshi, the women who made the tapestries, Bangladesh, the film project and many other subjects with at least 100 participants. 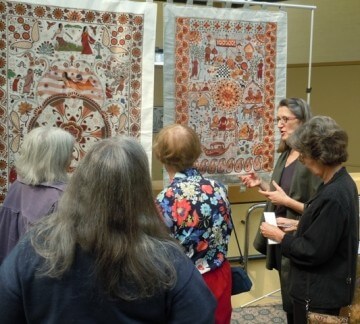 The EGA has at its national headquarters in Louisville, KY, an impressive collection of embroidered works, many of which are hundreds of years old and some of which were on display in Tacoma for the seminar.   One of the pieces on display, we found out to our pleasure, is a Surayia-designed work called “Flora the Embroiderer” that was made by women of the Widows’ Project.  Surayia gave permission for this project, located in Tongi, to use some of her designs.  Sales of the tapestries help to support widows.  We were unable to visit the project on our last trip to Dhaka, but plan to do so on our next trip, which we hope will be soon.

(The curator of the EGA collection kindly allowed us to photograph “Flora,” but we neglected to ask for permission to post the picture to this blog.  Once we receive permission we will be able to share this interesting piece with you.)

In addition to the EGA national collection, GPR embroiderers attending the seminar and classes organized an exhibit of their own work, which covers a range of embroidery styles.  One thing each piece had in common was sophistication and beautiful execution.  Len and I were particularly impressed by the Japanese embroidery work.  Unfortunately no photos were allowed in the exhibit, but it is open to the public and will be on view at the Bicentennial Hall behind the Hotel Murano in Tacoma through June 27.