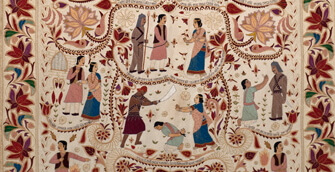 Surayia was profoundly influenced by the work of Nobel Prize winner Rabindranath Tagore, whose 150th birthday is May 7.  Tagore’s poetry, stories and plays inspired Surayia throughout her life as an artist.

During Surayia’s early years in Dhaka when she worked with the Women’s Voluntary Association she drew and painted cards with scenes drawn from Tagore’s poetry.  Later, when she began creating nakshi kantha tapestry, she interpreted some of Tagore’s works, including the play “Shyama,” a detail of which is shown above.