Len and I just returned from Sarajevo on a trip we thought would be unrelated to the film.   But it is amazing how related to the film the trip became!  Tolerance, embroidery, the triumph of human spirit — the threads of connection. 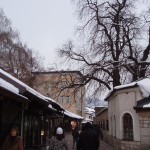 As we walked down the peaceful cobblestone streets past the reconstructed shops and markets in central Sarajevo and sipped cappuccino in the Viennese Café with its wood paneled walls and display cases of multiple-layered tortes, the scenes of an all too recent war seemed a distant past.   As a sparkling snow fell, lights on top of the minarets of the mosques grew visible in the dusk and the cathedral spires lit a fine backdrop to the adjacent street. 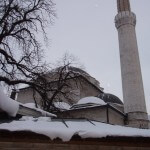 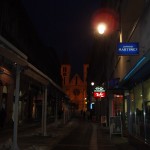 The call to prayer carried through the light mist by the river and we stepped into the Inat Kuća restaurant for a bowl of delicious traditional soup and some spinach pie.  The restaurant was decorated with fine embroideries of the region, and it struck me how similar the fill stitch was to those used in Surayia’s designs! 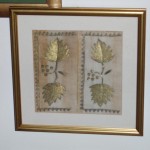 We were lucky to be accompanied by a young man who is now in the military of Bosnia and Herzegovina and who lived the war on the front lines.  As we walked down the streets of Sarajevo, past commemorative plaques and red markings on the streets in memory of the fallen, I asked him if it was difficult to talk about the war.  “Yes, at times.  But one of my best friends now was a person I fought against.”

Later at another dinner, I sat beside a musician who had composed for film.  We talked at length about the soul of music and I asked him if he would be interested in viewing Threads when it is completed.   Yes, of course.  It is about the human spirit, about the power we each have to rise above the difficult points in our lives…in Bosnia and Herzegovina, in Bangladesh, in our own communities.   And, together we talked of one day screening Threads at the Sarajevo Film Festival.