Today begins a three-part guest post by Canadian  fiber artist Anna Hergert.  Anna lives near Moose Jaw, Saskatchewan.  She holds London City and Guilds Diplomas in Art and Design, Embroidery as well as Patchwork and Quilting. Anna exhibits, teaches and lectures across Canada.  In 2011 Anna embarked on a journey to explore the humble running stitch while creating a self-published Kantha Primer.  For more information please visit her website at http://www.annahergert.com or her blog http://annahergert.wordpress.com

In 1998, shortly after I had embarked on my London City and Guilds education, one of the objectives was to research Kantha Embroidery and create a small sample. At that point I had never heard of Kantha and not one of my quilting and embroidery friends was able to provide me with specific insights – in fact the majority of the fiber artists I was connected with had never heard of the Kantha technique. 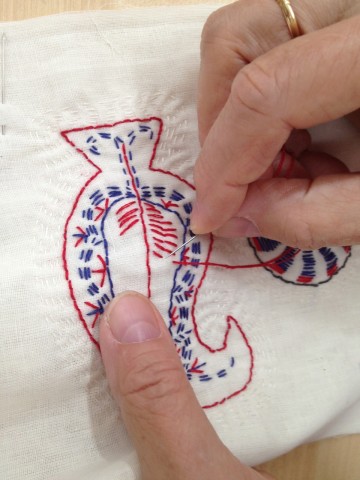 I love a challenge, and with that my research began in earnest, starting within my personal library where I was able to find a short paragraph describing the Kantha technique in “World Textiles” by John Gillow and Bryan Sentance. It defined the technique as “quilted and embroidered cloths made from recycled fabric in Bihar, West Bengal and Bangladesh.” Two small images did not provide a better understanding despite using a powerful magnifying glass. A special trip to the library was unsuccessful, and since I was a committed ‘luddite’ Google searches were not something I resorted to until early 2000.

Eventually a dog-eared techniques book from England, Embroidered Textiles by Sheila Paine, fell into my hands when visiting a second-hand bookstore. Lo and behold – one short paragraph was devoted to Kantha. The technique was simply described as several layers of white or light coloured cotton cloth, such as saris, sewn/quilted together with predominantly white thread using successive rows of running stitches. Patterns and special motifs are outlined with black, blue or red thread in backstitch. Motifs include flowers, animals, scenes from rural life and sometimes even historical figures. The creation of the cloth was usually considered a ritual as it was used for ceremonial purposes.

Could it be this simple? The short answer is: Yes. Eventually I retrieved a copy of Piecework Magazine from January/February 1994 which featured a well-informed article with several excellent colour images of Kantha as well as a small project. 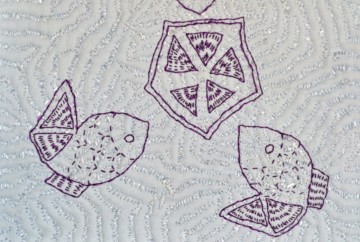 No time was wasted and I began with gathering simple supplies: three pieces of pale blue cotton, purple cotton floss, white rayon floss, basting thread, fabric marking pencil and embroidery needles. The stitches I needed to know were running and back stitches! I quickly embraced this simple yet versatile quilting technique and my first sample of three fish surrounding a pentagonal shape was completed. Filling in the shapes and the background with running stitches to create intriguing texture bordered on obsession on my part. What can I say? I love Kantha – the technique, the portability aspect of being able to bring my project along to meetings, doctors’ offices and even the possibility to stitch in the car are all strong reasons why I am passionate about Kantha!

By 2000 I was approached to teach Kantha for the first time. With my basic research I had enough information to share my knowledge in one and two day workshops. Classes were small and sporadic but year after year interest grew. I continued to immerse myself in new approaches of the technique and expanded my use and application of Kantha in a growing body of textile work. In 2001, I created one such variation by layering fabrics, including tulle and polyester sheer on hand dyed cottons to depict a landscape inspired by a postcard from Lake Powell, Arizona. 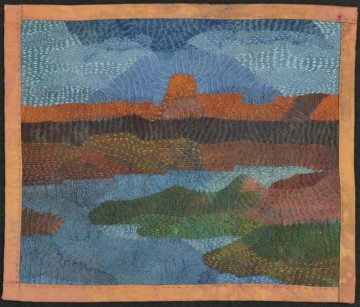 Variegated sewing threads added dimension and texture. In 2004, I incorporated the technique in one of my first large quilts (60” h x 42” w) titled After the Storm I. Quilting cotton, polyester sheers, tulle, and hand-dyed silk threads were combined successfully to depict an abstract cityscape. The texture created by using the Kantha technique resembled rivulets of water running down windowpanes during a storm and channels in the soil caused by erosion. After the Storm II followed in 2008. Both pieces caught the attentions of collectors and quickly sold.