Posted by Cathy and Len:

Threads was chosen by the audience as Best Short Documentary at the Gig Harbor Film Festival!  Threads screened to a full house on Saturday October 18, and on Sunday morning we received the good news that the film had won.

Marty Thacker, Barbara Rankin and the whole team at the Gig Harbor Film Festival put on a memorable Festival – for filmmakers and the community alike.  Thank you so much!  Thank you to everyone who came out to see the film, and the many people who have supported us from the very early days of this project.

We’ve been asked many times in recent days: “What’s next?”  Our top priority is to find sponsors to help us take the film to Bangladesh, where we can show it to the women and to others who we hope will be inspired by its story of sharing skills, resilience and determination in the face of obstacles.  We will also be working on film festival entries and making the film available for those who want to purchase it.  May the inspiration and hope of the story of Surayia, her art, and the women spread around the world! 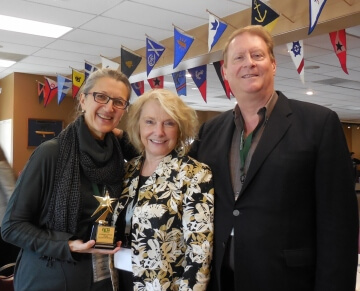 A wonderful evening at MAIWAColor and Beauty for the New Year!
Scroll to top