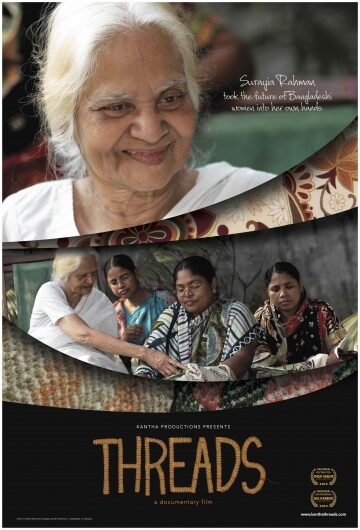 We wish everyone a happy and healthy 2016!  You can read our end-of-year recap newsletter here.

2015 has been a year filled with activity for Threads, and we look forward to announcing more exciting news soon.  Please keep following the list of screenings on our home page and Facebook, and do contact us at info@kanthathreads.com if you or someone you know would like to host a screening of the film.

As we noted in the newsletter, we are fundraising to dub the English portions of Threads into Bangla, and to travel to Bangladesh to show the film to a number of audiences, including in the slum where our friends from Spreeha work.  Please consider a tax-deductible year-end contribution to these efforts via the International Documentary Association.

Thanks to everyone who has helped us so much this year, especially to Lynn Stevenson who designed beautiful posters, flyers, bookmarks and postcards.

Posted by: Kathryn B. Borel

I happened to be reading David Brooks’ recently published book ‘The Road to Character’ when I was invited to attend the première of the documentary film ‘Threads’ at the Mosaic International South Asian Film Festival in Mississauga.  This well-crafted 30-minute documentary, produced by Cathy Stevulak and Leonard Hill, and directed by Cathy, chronicles the life of Surayia Rahman, a Bangladeshi woman who, in Brooks’ words, discovered her ‘core virtues’.

Like any young person, she had a dream.  She was determined to become an artist.  The road would prove to rocky, but her tenacity never failed her.  She was married off at 17 and had three children.  When her husband fell ill, she went to work and she became the breadwinner for the family.  When her elder daughter died tragically, she carried on.  She seemed to understand that her art, her work, would be the necessary means through which to grieve, to heal and move forward.

Surayia joined a social welfare organization, the Women’s Voluntary Association shop, in Dhaka and worked as a staff artist.  She sketched and painted at home.  She experimented with many media including even painting with mud on fabric.  She also created paintings inspired by the effects of the embroidery stitches on the kantha quilts, the traditional coverlets of Bangladesh and West Bengal made from the fabric of old saris, pieced together and embellished with running stitch1.

Surayia’s artistic skills were recognized and in 1982, along with a Canadian ex-patriate, she co-founded the Skills Development for Underprivileged Women (SDUW) where impoverished women could earn a living by stitching her designs.  This association was to be short lived and in 1986, she was unexpectedly terminated.  Not to be discouraged, she continued working on her designs from her home, a home that she had built from the proceeds of her previous years of hard work.  To her surprise, some of the women with whom she had worked at SDUW sought her out and pleaded with her to continue teaching them.  It was at this point, in her home, where Arshi (Bengali for ‘mirror’) was born.   It had not been her goal to run her own business, nor teach, but such a role was thrust upon her and she found that she had an ability to foster the embroidery skills of the women who flocked to her home.  Surayia’s dream to create her own original works, known as Nakshi Kantha or story quilts, was finally realized.  She drew her designs from memories of the past, stories of her culture.  They were transferred on to silk and using many of the stitches used in the traditional kantha quilts as well as introducing a fill-in stitch called ‘bhorat’2 the young women embroidered her stories .  The finished pieces, having undergone Surayia’s strict scrutiny, would be blocked, stretched and framed thereby moving the embroideries from their historically functional role to that of a decorative one.  It was a visionary move by Surayia. This move changed the discourse around her works from ‘craft’ to ‘art’, with, as a consequence, the enhancement of their value.  Her innovative style became known as ‘nakshi kantha tapestry’.

Today, Surayia’s work and that accomplished at SDUW and Arshi have found international recognition and are exhibited around the world in private homes and museums.  For the young women who worked with Surayia, translating her designs into magnificent works of art, they learned a skill and in the process they earned a living.  In addition, and maybe more importantly, they gained a community, a place to share, a place to learn, a place where they played a significant role and all of this engendered a sense of personal strength and empowerment.

I believe that Surayia’s story is what Brooks is talking about in his book.  She exemplifies those individuals that serve as an example.  She faced many of life’s great tests and she was not found wanting.   I do not believe that this was the life that she would necessarily have chosen at the outset, but it was the life that claimed her and she discovered that she had the necessary mettle to take up the challenge and with joy and satisfaction.  It is a remarkable story of ‘success’, not as defined in our current western terms, through material values, but as Brooks defines as ‘living in obedience to some transcendent truth, to have a cohesive inner soul that honours creation and one’s own possibilities.’

Surayia is now in her 80’s and her hands are no longer nimble.  The women she has trained, and there are many, have become her hands. In 2008, Surayia gave Arshi to the Salesian Sisters of Dhaka.  It is under this banner that Surayia’s students, now accomplished embroiderers, carry on the work of Arshi.    Thanks to Surayia, and the tenacity of these young women, now skilled and working, that all lead autonomous lives, able to care for their families, educate their children and walk with pride.

‘Threads’ is the story of a life at work, a success story of the most profound and far-reaching quality.  What is captured on film, and what I loved most about it, is the harmonizing of an inner voice with the outward actions.  Early in the film, there is a snapshot of Surayia as a young girl.  She has a beautiful, open face full of joy and optimism.   The latter scenes of the film show Surayia in her 80’s, and what catches your attention is that this luminosity still shines forth.   Brooks speaks about such people as if ‘they radiate a sort of moral joy’.   Surayia Rahman does, undeniably.

So, if ‘Threads’ is being shown anywhere near where you live, go see it.  You will be moved and inspired.  Also, by extension, you will be supporting the documentary film industry.   Often, and ‘Threads’ is no exception, the financing of these films is limited.  So supporting the film,  particularly through a donation, would show a commitment to producers like Cathy and Len allowing them to continue to promote the film and ensure its long life.

1   Running stitch is a series of continuous small stitches

2   Bhorat stitch is a filler stitch similar to Romanian stitch.

This piece originally appeared in Kathryn’s blog Embroiderer’s Diary.  We thank her for permission to post it here. You can see more of Kathryn’s work at http://www.artaiguille.com/

Posted by Cathy and Len

We’re excited to announce that THREADS will have its Canadian premiere at the Mosaic International South Asian Film Festival!  THREADS will screen with the film LISTEN TO ME at the Living Arts Centre in Mississauga on August 8 at 3PM.  You can get festival passes through Sulekha or Eventbrite and single tickets here.  #MISAFF15 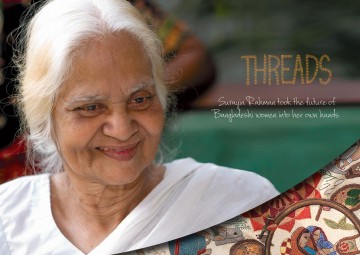 Surayai Rahman took the future of Bangladeshi women into her own hands.