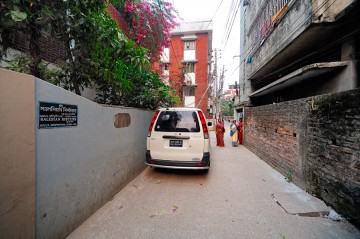 The lane in front of the Salesian House. Photo: Anil Advani

Len, Anil and I took advantage of the very light traffic on the afternoon of the Eid al-Adha to drive downtown for a visit to Sister Elizabeth and the embroiderers working at the Salesian Sisters house in Monipuri Para.

With Anil at the wheel, we found the house, down a narrow street, and were warmly greeted by Sisters Elizabeth and Joseph, Bangladeshi members of the religious order started originally in France.  The first group of Salesian nuns who came to Bengal in the 1870s died of disease.  Another group came in the 1920s and founded convents, which now number ten in Bangladesh.

Sister Elizabeth and the Salesians carry on producing Surayia’s designs, which she gave to them at the time she became unable to work.  Surayia’s embroiderers continue to work with Sister Elizabeth, living at home and coming to the convent regularly to pick up materials, turn in finished work and receive payment for tapestries sold.  Other young women, primarily members of the Garo and Tripura ethnic groups, live at the Salesian house and are able to earn a living doing extrememly fine embrodery.

A sample of the fine embroidery at the Salesian House. Photo: Anil Advani.

Meeting Sister Elizabeth in person, after watching her interview in our film footage many times, was a real pleasure! 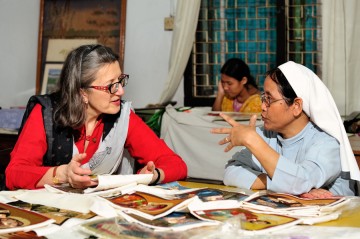