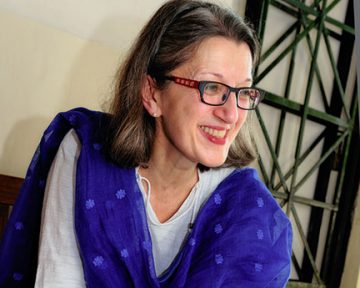 Cathy is a Canadian filmmaker, born in a small coal-mining town in the foothills of the Rocky Mountains. Ten years ago, while living in Bangladesh and working as a senior adviser with United Nations Development Programme in Bangladesh, she met many women who were quietly revolutionizing their own lives through art and craft, looking to their own culture and resources to do so. Their resilience reminds her of the struggles in the stories of her ancestors, their inspiration a glow that needs to be shared. Cathy worked across Canada and internationally as a public affairs and international development consultant and is now based in Washington State, USA. Threads is her debut as a documentary director. 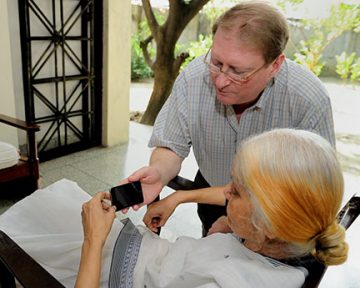 Leonard was a U.S. diplomat posted to Bangladesh when he first met Surayia Rahman and became fascinated by her art. He has worked with Director Cathy Stevulak to assemble a multinational team of award-winning film makers and to participate in outreach events and discussions of THREADS worldwide. 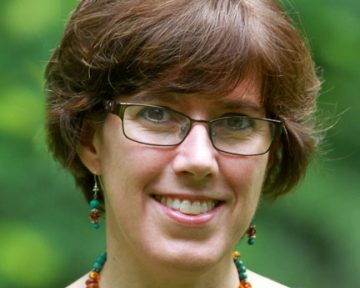 Catherine Masud is an award-winning filmmaker with over 25 years of experience in producing, directing and editing. She has worked in both documentary and fictional genres. Her films have screened at major festivals, been theatrically released in many countries, and broadcast on such outlets as Turner Classic Movies, Channel 4 (UK), TV Ontario, Telequebec, and SBS (Australia). The Clay Bird (producer and editor), won the Critics’ Prize at the Cannes Film Festival. An American citizen by birth, Catherine lived the majority of her adult years in Dhaka, Bangladesh, working together with her late husband and filmmaking partner Tareque Masud. 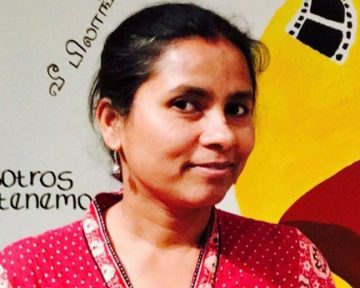 Rita Meher has been working in the video industry for over 14 years, making her debut in television career as a producer in Japan. Born and brought up in India, Rita made her first short film Citizenship101 in 2002 based on her own immigrant experience. She was also the production manager and assistant editor for Nazrah, a Muslim Woman’s Perspective that won many festival awards. Currently she works as freelance video producer, editor and instructor in Seattle. She is the founder and director of Tasveer, a South Asian film organization, and directs two major festivals called Aaina: South Asian Women Focus and Seattle’s Independent South Asian Film Festival.

Dina Hossain is an award-winning filmmaker, with over 20 years of experience making documentaries for independent markets and television broadcasters. Most recently, she has worked with international and national NGOs in Bangladesh, making advocacy videos focused on issues of gender, the environment and human rights. These include Waiting for Justice, Saving the Sundarbans, and Christy Turlington’s No Woman, No Cry. Dina started her career as an assistant editor on Tareque and Catherine Masud’s seminal documentary, Muktir Gaan (Song of Freedom). Before returning to Bangladesh in 2010, she was based in New York and produced documentaries for the BBC, PBS, Frontline and ABC News, Nightline. She co-produced programs for New York Times Television, and the Emmy award-winning American Master film, Leonard Bernstein: Reaching for the Note. Her interest in international stories has taken her around the world to countries including Afghanistan, Iran, Egypt, Nigeria, Kenya and Malaysia.

The late Mishuk Munier was a news and documentary cameraman specializing in assignments in Asia. He had over 25 years of experience working in a variety of formats, both film and video. He worked as a cameraman for BBC World Service, WTN, ARD1, Channel 4, ETV, CBC, and Discovery Health – in Bangladesh, India, Afghanistan, Singapore, Malaysia, and Canada. In addition to his camera work, Mishuk designed and set the newsroom for Ekushey Television, Bangladesh’s first private terrestrial channel, as Director News Operations. He also taught broadcast journalism at the University of Dhaka, and received a Master’s degree in Journalism. At the time of his untimely death in 2011 Mishuk was CEO and Director of News Operations for ATN’s 24-hour news channel in Dhaka.

Tobie Caplette is a graduate of Capilano University, Indigenous Independent Digital Filmmaking Diploma Program. She is the producer/director/cinematographer for several student films as well as a current production entitled Beyond Grief.

Tanveer Alam Shawjeeb is a singer/musician/composer/arranger with over 25 years of experience in performing producing, directing and editing. He has worked in both documentary and fictional genres. His major credits include “Bari kothay bolo” and”Mon Uchaton,” solo albums that won the best debut album award and best Nazrul Album by popular choice at the “Citycell-Channel i Music award in Dhaka; Runway (background score), a film by the late Tareque Masud; Rajputtur (background score, foley, and sound designing), a children’s film. Shawjeeb is also known for creating the first acapella choir in Bangladesh named, “Choir Bangla.” Currently working as the Head of Music at Mediabox in Dhaka, Shawjeeb graduated as a sound engineer from Toronto Film School.

One of the earliest supporters of the Threads project, Anil contributed hundreds of iconic photos of Surayia, the women and the art.

Paul Miller, a graduate of The Seattle Art Institute, is a freelance sound editor, and an editor at Bad Animals.

Tom Schlesinger was the story consultant on Nowhere in Africa, which won the Academy Award for Best Foreign Film, and Beyond Silence nominated for an Academy Award. Tom was also the story consultant on the HBO documentaries Prom Night in Mississippi, with Morgan Freeman, and the Emmy nominated A Small Act. Tom has taught screenwriting seminars for Pixar Animation Studios, Lucasfilm Ltd., the American Film Institute, the Writers Guild of America, the Directors Guild of America, and the National Film Schools in Berlin and Munich.

Niaz is a well-known expert on nakshi kantha and the author of The Art of Kantha Embroidery.