The quilting tradition of Bengal (now divided into the country of Bangladesh and the state of West Bengal in India) is a long and rich one, but not one well known in North America or Europe.

For those interested in learning more about this remarkable history and the women involved, here are some resources:

Kantha:  The Embroidered Quilts of Bengal, edited by Darielle Mason, is an amazing book, beautifully produced and knowledgeably written.  It is the catalog for an exhibit at the Philadelphia Museum of Art that Len and I were fortunate to be able to see in early 2010.  Many of the quilts in this book were collected by Stella Kramrisch; one of the first nakshi kantha tapestries that Surayia designed was based on a kantha in Kramrisch’s collection and was purchased by the Sonargaon Hotel in Dhaka.  We saw it there in late 2010. 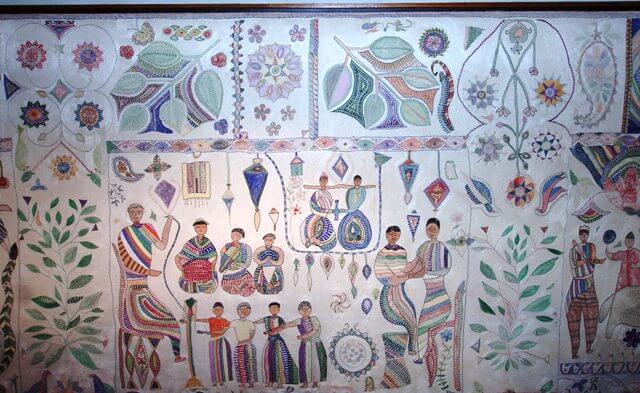 Deepa Balagopal’s blog is a rich source for anyone interested in stitching and embroidery, particularly that done in South Asia.  This post includes pictures of Surayia’s designs as well as a traditional kantha.

The Embassy of Bangladesh in Bahrain has a page devoted to kantha with a concise article on the history and traditions.  Unfortunately the photo link does not seem to work.  It would be interesting to see which art they have chosen, particularly since Surayia’s pieces were often purchased by the Government of Bangladesh in the 1990s and used as official gifts to heads of state, heads of government and other foreign dignitaries.

This post from the FhireDekha Forum gives a good overview of nakshi kantha and includes several photos of Surayia’s designs side-by-side with traditional work.

Our friend, Professor Niaz Zaman, had this to say about the quilting tradition and how Surayia adopted it and made it an art form:

The kantha is an indigenous quilt, made in Bangladesh and West Bengal, India, traditionally from stitching layers of old clothing, such as saris.   Everyday kanthas are used as bedcovers, baby blankets, clothes, wrappers for books, and other articles.  For special occasions such as weddings, kanthas are made as gifts and embroidered with scenes from legends, folktales, contemporary life, religious, floral, and symbolic motifs and border patterns.  Though each piece is different, most kanthas have a similar pattern, with a lotus at the center forming the focal point of the design. Embroidered quilts with artistic patterns have come to be known as nakshi kantha.  The main stitch used is the running stitch, but in a variety of ways, creating a variety of designs and textures.  Traditionally, red, black or blue yarn was predominantly used for motifs, with white yarn used for the background or field of the quilt.  However, the greater availability of colored yarn – generally cotton – has led to more variety of color.  After a period of dormancy, the nakshi kantha has seen a revival.  It is no longer only a domestic folk art meant for family members, but an art form for public display.

Surayia Rahman’s pieces follow the kantha tradition but with several changes.  Instead of old cotton, she uses silk. She also draws the designs of the entire piece before it is embroidered.  The running stitch is used for the empty spaces between motifs or scenes, but the motifs themselves are filled with the Romanian stitch, called in Bangladesh bhorat [filling].  Thread is typically rayon from bamboo, or silk.  She has been inspired by the poetry of Jasim Uddin and has also drawn scenes from rural life, history, as well as occasionally contemporary events for her pieces.

Let me know if you find other good resources on the history and traditions of quilting in Bengal!

What else would you like to learn about kantha?

Len and I — accompanied by our friend Carolyn Wiley, who organizes the Fiber Arts Festival in Longbranch, Washington — had the opportunity to talk to a nearby quilt guild about traditional nakshi kantha of Bengal, Surayia’s art and the film.  One of the subjects we talked about was the link between traditional Bengali quilting and what Surayia created starting in the early 1980s when she imagined nakshi kantha stitching as some of the finest tapestries in the world. 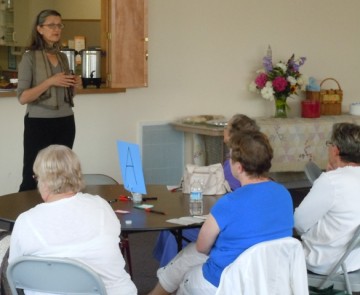 It was wonderful to have the opportunity to interact with so many knowledgeable quilters who could quickly understand the significance of both the design and the craftsmanship of the art that we brought to show.  We really appreciated the interest people showed and the questions they asked.

It was also a pleasure to have the opportunity to explore Vashon Island, Washington, before we had to catch a ferry to get back home.  Vashon is a great place, home to innovative  businesses like fair-trade shop Giraffe (“Beauty and Justice Hand In Hand”) and the incredibly well-stocked Island Quilter where one can get lost in batiks, polka dots and yarn of many types.  We plan to be back to visit soon.

We appreciate very much the generosity of everyone from the Quilt Guild who contributed to a donation to help us produce the film and to support creativity in life!  It is vital that we be able to regularly talk with Surayia in Bangladesh about the film story and to discuss her inspirations for various of her designs….and this community of women in Vashon have reached out to us to help make this happen.

Please spread the word about Surayia and the documentary-in-progress Threads to other quilters!

For those who have had trouble with the time it takes our trailer to buffer before you can watch it, we now have a faster-loading version posted on Vimeo.  This link will take you to it.

The high-definition version, which can require some patience as it downloads, but is a nice visual experience, is also on Vimeo at this link.

Thanks again to Rita Meher for her help in creating the two versions.

I recently came across this article on passion by Lane Wallace on The Atlantic‘s website, and it got me thinking about how Surayia’s passion for art led her to create so much beauty despite having to overcome significant obstacles.

“Passion” can be an over-used word these days, so I apply it to Surayia and her art with caution.  But it’s hard for me to think of a better word to describe what Surayia felt from an early age when she first became aware of art.  She describes the Bismillah ceremony where, at age four years four months and four days she sat on her father’s lap as he guided her hand to make the letters of the alphabet.  The “intoxication” she felt when smelling paper and ink.  “I was crazy in painting,” she says of her early years. 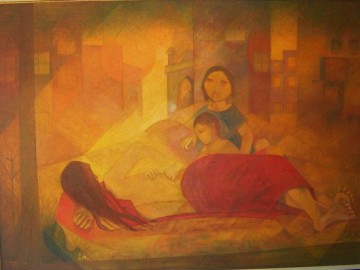 That passion for art and for creating both drove and sustained Surayia through a life that included its share of challenges and constraints.  She returned to art despite economic hardship, and it proved a way for her and her family to survive difficult times.  Her passion for creativity led her to move from painting to embroidery based on the traditional kantha of Bengal; she envisioned the traditional quilts being made in a way that would let them stand proudly beside the most famous tapestries in the world.  She was able to take in stride the change from being an artist, creator and teacher in a development project to the founder of her own organization and a pioneering social entrepreneur.

Through her husband’s illness, the death of her eldest daughter, and the challenges of raising a family and educating her children, Surayia kept her mind focused on her passion: art.

As Wallace notes in her article:  “Passion, despite how often we use the term to tout company commitment or extol romantic excitement, is often misunderstood or confused with other motivations.  … passion is one of the most important elements in any effort to improve a community, build something of value in the world, and even survive tough times or a daunting economy.”

It was a pleasure to meet Frederick Marx and Tracy Seeley in person.  Frederick and Tracy have been in the Seattle area on tour to promote Tracy’s new book, My Ruby Slippers:  The Road Back to Kansas, and Frederick’s new film, Journey from Zanskar.

We saw Zanskar at the Grand Cinema in Tacoma, a nonprofit theatre dedicated to showing independent films.  (There are fewer and fewer of these left any more, so support them wherever you can!)  It was great to see a nearly full house for Zanskar, which is a story of two Buddhist monks’ struggle to bring a group of children from a remote area in India to a distant school that will provide not only western education but also crucial religious and cultural studies.  Zanskar is a powerful film that works on a number of levels, importantly that of cultural survival.  It is narrated by Richard Gere and well worth seeing.

Tracy had a reading of her book at the Elliott Bay Book Company in Seattle, where we picked up a copy.  (There are fewer and fewer independent booksellers left as well, so support them, too!)  Ruby Slippers, part of the “American Lives” series, is a compelling story of a woman searching for her roots as well as what those roots mean.  It’s very well-written and personal.  Definitely worth reading.

Len and I had the opportunity to spend a couple of hours working with Frederick on Threads while he was in Seattle and really appreciate his experience and help.  The expertise and dedication so apparent in films like Hoop Dreams and Zanskar comes through in everything he does.  We are eager to move forward with the useful suggestions that the three of us discussed together.

We wish Tracy and Frederick all the best with their book and film tour!